A Dictionary of Brexit 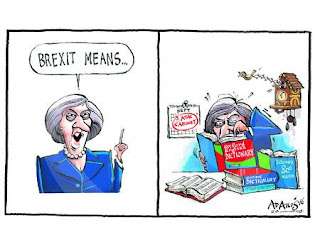 As of October 2019 an UPDATED version of this dictionary can be found on timothyoliver.com/brexicon

The vote by the British people to leave the European Union has given rise to a plethora of new words such as 'Brexit'. 'Brexit' itself is now defined in the Oxford English dictionary as: (noun) A term for the potential departure of the United Kingdom from the European Union.

Below I've listed some of the other words and phrases - some common, some not so common - that have been invented to define what Brexit means. I've begun to link to examples where I can find them. I discussed the Brexicon in a piece for the LSE's Brexit blog.

I'll update this page as I find new words or they emerge (and will get around to putting them all into alphabetical order). Please email me with any suggestions, examples and links - timloliver@gmail.com

Film, TV and Song Versions
(Credit for some of these goes to the wonderful Facebook Group, 'I'm sorry I haven't a clue appreciation society.')

Brexit is as Brexit does
Brexit is like a box of chocolates: you never know what you're gonna get
Brexit Island
Brexit Without a Cause

Everything you wanted to know about Brexit, but were afraid to ask
Cassabrexit
My Big Fat Greek Brexit
No Sleep Till Brexit
Last Exit to Brexit
Seven Brides for Seven Brexits
The Good the Bad and the Brexit
Truly, Madly, Brexit
Brexit Actually
Brexit through the looking glass
Minority Brexit
The Neverending Brexit
2016: A Brexit Odyssey
I, Brexit
A Brexit Too Far
Brexit Day
Never Gonna Give You Brexit
Inglorious Brexit
I'm Sorry I Haven't a Brexit
The Seven Year Brexit
Crazy Little Thing Called Brexit
House of the Rising Brexit
Carry On Brexit
Gone With the Brexit
Deep Brexit
Now That's What I Call Brexit!
Brexit at Tiffany's
No Brexit No Cry
Show Me The Way to Brexit
A Hard Day's Brexit
Magical Mystery Brexit
The Nightmare Before Brexit
Debbie Does Brexit
The Incredible Brexit
There Once Was an Ugly Brexit
Billion Dollar Brexit
Monty Python's The Meaning Of Brexit
The Hitchhikers Guide to Brexit
You Got Brexit!
Brexit, Minister
The Brexit Show
1001 Things to do Before you Brexit
A Tale of Two Brexits (It was the best of Brexit, it was the worst of Brexit...)
Much Ado About Brexit
The Brexit Chronicles
No Brexit Please, We're British
Brexit Recall
Waiting for Brexit
The Man From Brexit
Full Metal Brexit
Dr Strangelove, or How I Learned to Stop Worrying and Love the Brexit

A View to a Brexit
A Spectre of Brexit.
Brexit and Let Brexit
Brexit Another Day
Brexit is Forever
Brexit Never Dies
From Brexit with Love
Leave and Let Die
Licence to Brexit
Quantum of Brexit
The Brexit is Not Enough
You only Brexit twice
Dr Brexit