Published today online by the Journal of European Public Policy is my article 'European and International views of Brexit.' Originally presented as a paper for a conference at the University of Copenhagen, it now forms part of a debate section of articles put together by Graham Butler, Mads Dagnis Jensen, and Holly Snaith.

European and International views of Brexit
Abstract: A British withdrawal from the European Union (EU) would change Britain, the EU, the politics and security of Europe and the place of all three in the international system. To explore these possible changes, this article draws on a series of commissioned analyses that look at the views of Brexit in other EU member states and select third countries outside the EU. Specifically, it examines and maps out the prevailing ideas of what the aforementioned changes could entail. It argues that ideas connected to European unity and integration will define how a Brexit is managed.

Other articles in the debate section include:

‘Slow change may pull us apart’: debating a British exitfrom the European Union
Graham Butlera, Mads Dagnis Jensen & Holly Snaith
Abstract: With a referendum set to take place on 23 June 2016 in a large and important European Union (EU) member state on whether it should remain within the Union or leave altogether, this year will prove crucial for all Europeanists. Brexit is a real possibility that both the Union and other member states must be prepared to plan for and eventually absorb the potential impact of. Whilst the process of ‘will they, won’t they’ will continue until the referendum, and even beyond, this level of uncertainty creates challenges for the existing actors with a stake in the process. This introductory contribution will set the scene for the ensuing debate, which flows from the various perspectives that each of the authors have with regard to the ultimate question of a Brexit. The three editors introduce the legal, political and economic themes that run through the articles, whilst simultaneously attempting to map out the trajectory for if, when and how a Brexit may actually occur, given the differing perspectives in the debate.

When politics prevails: the political economy of a Brexit
Mads Dagnis Jensen & Holly Snaith
Abstract: This article analyses Britain’s quest to negotiate its future membership of the European Union (EU) through the lens of Liberal intergovernmentalism. The article demonstrates that despite the significant economic consequences of a potential Brexit, party political factors have hitherto proven more significant in defining the terrain of the debate than lobby group influence where a cross section of United Kingdom (UK) lobby groups are either actively or passively in favour of remaining within the EU ahead of the referendum.

Ties that bind, can also strangle: the Brexit threat and thehardships of reforming the EU
Daniela Annette Kroll & Dirk Leuffen
Abstract: This article links insights from research on European Union (EU) decision-making and on differentiated integration to the recent negotiations about the future United Kingdom (UK)–EU relationship. We argue that since a Brexit would overturn well-established statics of EU decision-making, EU member states reacted differently to the British demands. States that feared a weakening of their position after a Brexit were more willing to grant concessions to the UK. This largely applies to most northern member states. In contrast, most other member states appeared more reluctant to meet the British expectations. First, these states hoped to improve their standing inside the EU after a Brexit. Second, reflecting deeper structural tensions, the British demands would have entailed higher prices for these member states. Anticipating heterogeneity between the other member states, and thus the stability enhancing mechanisms of the joint decision trap, the UK downscaled its demands before the European Council of February 2016. In consequence, the negotiations on the terms of Britain’s EU membership did not result in a grand overhaul of the EU, but rather in symbolic concessions aimed at pleasing British domestic politics without severely harming other member states’ interests.

The ‘hokey cokey’ approach to EU membership: legal options for the UK and EU
Paul James Cardwell
This contribution analyses the potential legal outcomes in meeting the United Kingdom’s (UK’s) demands in advance of the referendum and what they might mean for EU integration should the UK vote to remain in the Union. It argues that there is unlikely to be a ‘quick fix’ to meet the full range of demands, since there is no obvious legal mechanism which can satisfy the demands in either substance or the proposed time-frame.

Unilateral withdrawal from the EU: realistic scenario or a folly?
Adam Łazowski
This article looks at the legal parameters of a unilateral withdrawal and argues that it is in the interest of all concerned that a Brexit, if it materializes, is properly negotiated and governed by a withdrawal agreement addressing all pertinent legal issues.

Preparations for a Brexit II: views from Croatia, Estonia, Ireland, Lithuania and Romania

Today the LSE's Brexit Vote blog published the second in the series I'm compiling that looks at what positions other EU member states might take in any withdrawal negotiations with the UK. Full piece here: http://blogs.lse.ac.uk/brexitvote/2016/04/29/preparations-for-a-brexit-ii-views-from-croatia-estonia-ireland-lithuania-and-romania/ 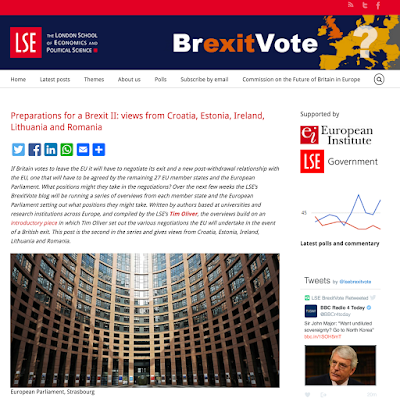 A not so awkward partner: why the UK has done more for the EU than we think

Published today by The UK in a Changing Europe project is a shortened version of the piece Oliver Daddow and I had published earlier this month by the LSE's Brexit Vote Blog. It looks at how the UK's reputation for being an awkward partner in the EU can only be taken so far. Britain has not always been so awkward and remains an important part of European cooperation. 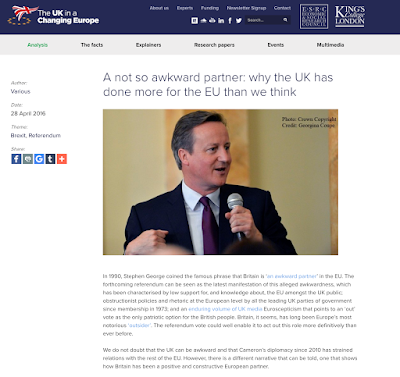 The House of Commons Foreign Affairs Committee has published its 'Implications of the referendum on EU membership for the UK's role in the world.' The report quotes written evidence I submitted last year with Alumt Möller of the ECFR. You can read the evidence here and the report here.

Speaking in Leeds on Tuesday 3 May

Next Tuesday 3 May (5:30-7:30pm) I'll be taking part in a University Leeds event on the UK-EU referendum. Details here: https://www.eventbrite.co.uk/e/brexit-the-consequences-of-britain-staying-in-or-leaving-the-eu-a-debate-tickets-24004731799 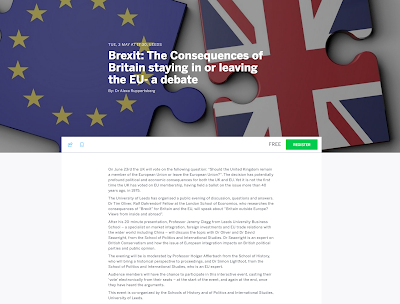 On 20 May I'll be speaking at a CIDOB and LSE organised event in Barcelona to examine the possible scenarios for a new UK-EU relationship. I'll be setting out some ideas for what a 'harsh Brexit' might look like. Details of the event can be found here: http://www.cidob.org/en/events/regions/europe/scenarios_of_a_new_uk_eu_relationship 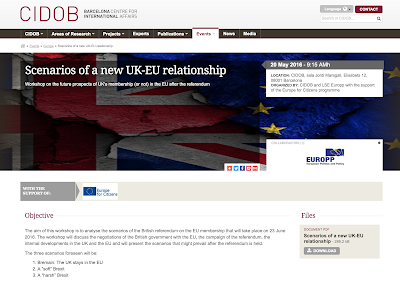 Interview with The Cipher Brief

I was interviewed about Brexit by The Cipher Brief, a US based online forum for private sector defence industry companies, the US intelligence community and the broader US defence world. Read the full interview here: http://thecipherbrief.com/article/exclusive/europe/breaking-down-obama%E2%80%99s-intervention-brexit-debate-1093 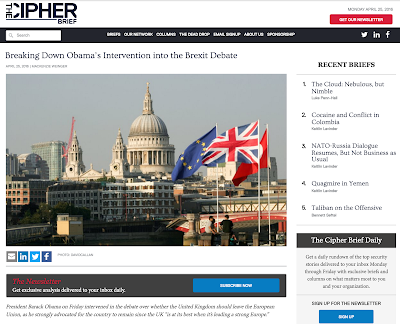 Quoted in the New York Times

Quoted in the NYT's piece about Obama's visit to London and comments on the Brexit question.

'Tim Oliver, an expert in trans-Atlantic relations at the London School of Economics, says Obama is in a no-win situation.

Obama is not the only American offering his opinion. Eight former U.S. Treasury chiefs said Wednesday in a letter to the Times of London that Brexit could diminish Britain's influence and threaten London's "global primacy" as a financial center.

Oliver said many American politicians, policymakers and diplomats regarded the EU referendum as "a bit of an unwanted headache" and believed a Brexit would weaken Britain on the world stage. 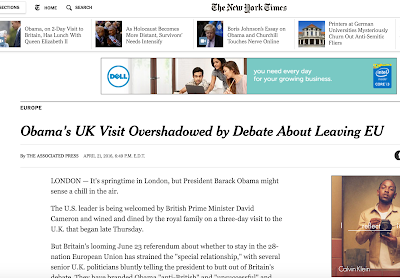 Obama is right to repeat his opposition to Brexit

A piece for the UK in a Changing Europe on Obama's intervention in the Brexit debate. http://ukandeu.ac.uk/obama-is-right-to-repeat-his-opposition-to-brexit/ 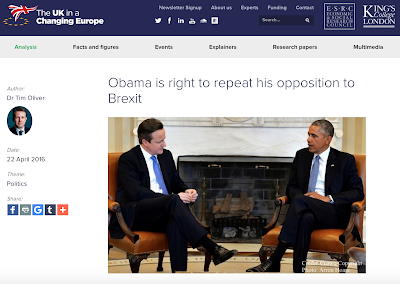 Preparation for Brexit series: views from Denmark, Italy, the Netherlands, Slovenia and Spain

Below is a link to the first in the 'Preparations for Brexit' series being run by the LSE's Brexit Vote blog. Views from Denmark, Italy, the Netherlands, Slovenia and Spain. http://blogs.lse.ac.uk/brexitvote/2016/04/21/preparations-for-a-brexit-views-from-denmark-italy-the-netherlands-slovenia-and-spain/ 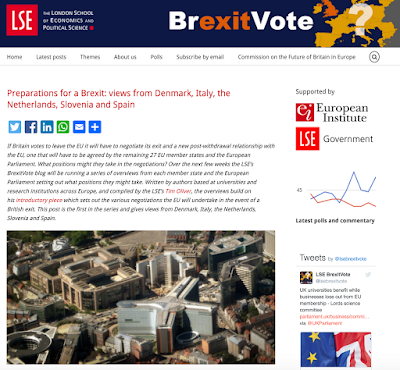 Tim Oliver of the London School of Economics, a specialist in British foreign policy, said Brexit would cause the US an "unwanted headache".
"The UK has a special relationship with the USA but that is most true in the three areas of nuclear weapons, intelligence and special forces," he told AFP.
"The wider relationship fits into a much wider and special US-European relationship."
Oliver argued that a Brexit would also cause problems for Beijing, adding: "Few in the UK appreciate that one of the longest-standing supporters of European integration has been China."
Read the whole piece here: https://www.yahoo.com/news/rule-britannia-eu-vote-spotlights-uks-world-status-103419282.html 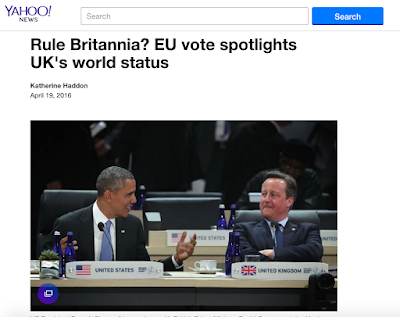 A short article for the Ripon Society's magazine in which I explain why the referendum will not end Britain's obsession with arguing about Europe - http://www.riponsociety.org/article/facing-britains-european-obsession/ 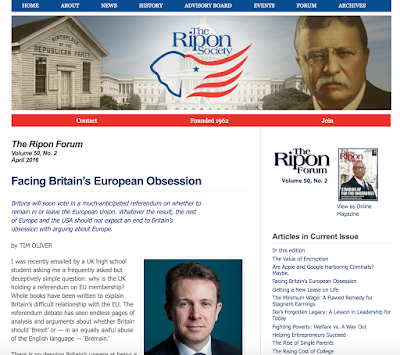 I recorded several short videos as part of an LSE Brexit Vote series in which I answered questions about UK-EU relations.

Will a Brexit hurt London more than the UK?

Could the vote alienate London from the UK?


Could the UK close its borders?


Impact of a Brexit vote on the EU

How would the world view Britain in the event of a Brexit?

Will the vote settle the European question once and for all?

A not so awkward partner

A co-authored piece with Oliver Daddow, published by the LSE's Brexit Vote blog, challenging the idea that the UK is as awkward a partner in the EU as it is often made out to be. Link here: http://blogs.lse.ac.uk/brexitvote/2016/04/15/a-not-so-awkward-partner-the-uk-has-been-a-champion-of-many-causes-in-the-eu/ 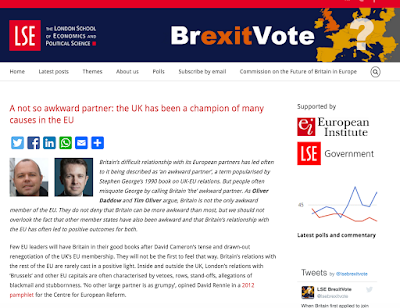 University of Pittsburgh: The Continent Is Cut Off! The British Referendum on the EU.

Next Tuesday, 19 April at 5pm UK time, I'll be taking part in an online conference organised by the University of Pittsburgh on the UK's referendum on the EU. Details below and here. 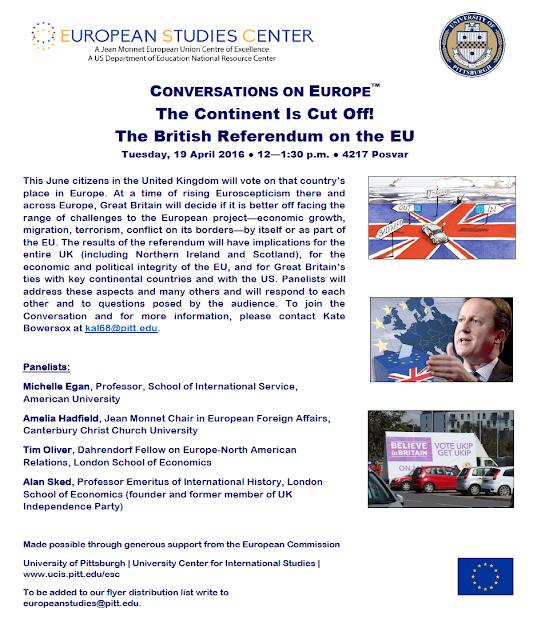 Preparations for a Brexit: the EU will shape what happens after a vote to withdraw

Today the LSE's Brexit Vote Blog begins a series in which researchers in the other 27 EU member states and the European Parliament set out how their member state or EU institution might approach the negotiations that would follow a British vote to leave the EU, i.e. what might their red-lines be, what deals might they do amongst themselves etc. Full piece here. 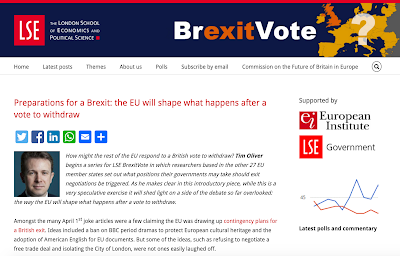