The dog that hasn't barked: the European Parliament and the Brexit debate

The LSE's Brexit vote blog began today a series of posts compiled by me in which MEPs outline what role they think the European Parliament will play in the UK-EU renegotiation and any Brexit.

The European Parliament and the UK’s renegotiation: what do MEPs think?

Debates about the future of UK-EU relations have paid little attention to the European Parliament. There have been no studies comparable to those that have looked into how member states view therenegotiation or might respond to a Brexit. Media reports indicate that the European Commission taskforce handling the UK renegotiation has even looked into ways of avoiding the Parliament becoming involved. Whether or not the Parliament will have any say in the renegotiation, it is clear that if Britain votes to withdraw then the EU Treaty’s withdrawal procedure guarantees the Parliament a say in any deal over an exit and a new UK-EU relationship.
Continued here: http://blogs.lse.ac.uk/brexitvote/2015/12/18/the-european-parliament-and-the-uks-renegotiation-what-do-meps-think/ 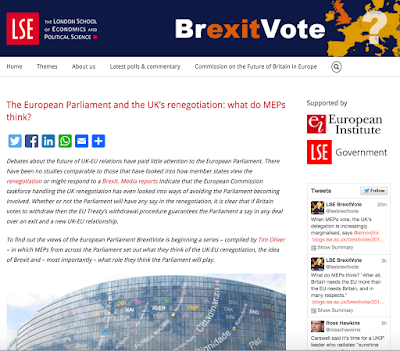 The following book review will appear in Political Studies Review, Vol. 14, No. 3, August 2016.

In the time that Britain has been awaiting the outcome of the Chilcott Inquiry a plethora of books has emerged to serve as primers to the report into Britain’s role in the Iraq War. High Command and British Generals in Blair’s Wars are two members of this growing collection of works written by the former soldiers, politicians and civil servants who played a part in Britain’s involvement in the post-9/11 conflicts. Linking the books, both products of Oxford University’s ‘Changing Character of War programme’, is an attempt to get to grips with how Britain, and in particular the British Army, found themselves in the mess they did in both Iraq and Afghanistan. In neither conflict were Britain’s strategic ends, ways and means clearly defined or adequately provided for. As both books argue, this was not simply the result of failings by Prime Minister Tony Blair or other individuals such as senior officers and civil servants. Their failings were part of a dysfunctional relationship within and between the political and operational levels of these conflicts. The result was that on a good day all that Britain and her military could do was muddle through. On the bad days – of which there were many – it led to unnecessary deaths and strategic defeat.

High Command: British Military Leadership in the Iraq and Afghanistan Wars takes us into the inner workings of the Ministry of Defence (MoD) and British military. By exploring such issues as poor management, difficult career structures, laughable procurement systems, sloppy training, doctrine and thinking, long-running funding inadequacies, strained relations with the rest of Whitehall and so forth, the book not only gives an insight into the MoD (one familiar to anybody with knowledge of UK defence matters) but in doing so picks over a political-bureaucratic-military system that was destined to fail in Afghanistan and Iraq. Christopher Elliott’s analysis is of an institution where nobody seems to have been in charge and where senior officers can today claim to have been in the dark over major strategic decisions. While a great deal of blame can be and is directed at Blair, as Elliot points out, senior officers tolerated a dysfunctional MoD that made things worse. These officers receive some analysis, but Elliot doesn’t stick the bayonet into whoever he thinks is most to blame. Instead he sets out each officer’s strengths and weaknesses, mistakes and sound decisions. This is despite him rightly pointing out that no senior officer (or civil servant or politician) has been demoted, sacked, disciplined, charged or faced any other form of official punishment for failings in Iraq and Afghanistan. Sadly, the book’s recommendations for changes have been overtaken by actual reforms, some of which happened long before the book was published.

British Generals in Blair’s Wars provides us with more detailed mini autobiographies of recent senior officers. Drawing on their experiences of conflicts since 1990, albeit with a focus on Iraq and Afghanistan, the book offers insights from 23 senior officers with a few pieces from others. The chapters vary in quality, some better written and more cerebral than others. Given the breadth of experience on offer it comes as no surprise that each chapter’s conclusions can often be more wide-ranging than the narrow focus of the case study presented within the preceding pages. The result is a book that can be read as a series of pleas to future commanders to learn the lessons from an exceptional time for the British Army; exceptional in no small part because as junior officers these authors prepared to play a bit part in a global nuclear war and not the conflicts that defined the culmination of their careers. Officer education (or lack of it), learning from past mistakes and the challenge of adapting to the changing character of war arise throughout the book. Learning requires open and frank discussion, which is not easy when the MoD appears hostile to investing in training or allowing open discussion. It is no surprise that the MoD refused to allow six contributions from serving officers to be published in the volume.


These books, then, are about decision making in conflicts where the political direction was vague because of the inherent ambiguity of most high-level political strategy; where the political, operational and tactical levels of strategy were confused; where public support has been questionable and vulnerable; where the limited ways and means – especially money – available has meant that British blood has been cheaper than British treasure; where planning and doctrine have been dubious, untested or long neglected; where the military’s ‘can do’ attitude meant officers had an itch for fighting which sometimes led them to take the initiative without political support; and where decisions and actions have depended on allies and, most difficult of all, local political developments. Such problems are to be found in many states which have their military deployed overseas, and consequently these books will be of interest far beyond the UK.
Posted by at 5:21 pm

A kingdom of many parts: analysing how Londoners and the English view the EU is key

A piece for the LSE's Brexit Vote blog looking at how the EU referendum has the potential to highlight differences between London, England and the UK. 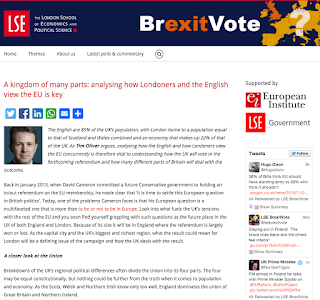 A piece for the LSE's Brexit Vote blog on the 5 I's that will determine how the EU would respond to a Brexit and how we need to open up the theoretical analysis of the issue: http://blogs.lse.ac.uk/brexitvote/2015/12/03/europes-potential-responses-to-a-british-withdrawal-from-the-union-will-be-determined-by-ideas-interests-institutions-the-international-and-individuals/ 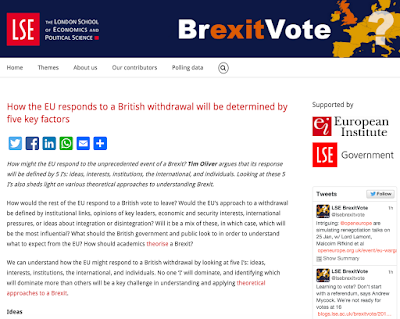