Quoted in Anadolu Agency, a Turkish press agency, piece on the UK-EU referendum 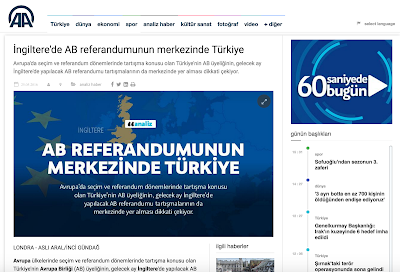 Preparations for a Brexit IV: views from Austria, the Czech Republic, Finland, Greece, and Malta

Published today by the LSE's BrexitVote blog is the fourth in the series on how various EU member states might be preparing for a British exit. Views here from Austria, the Czech Republic, Finland, Greece, and Malta. 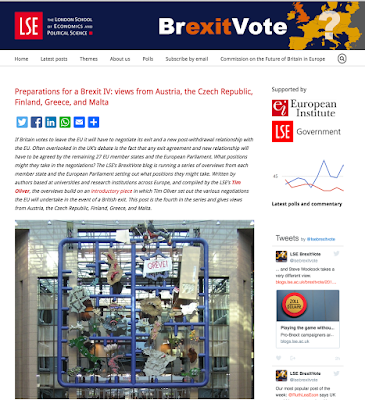 An audio recording of the event at Chatham House to discuss the foreign and defence implications of Brexit: https://www.chathamhouse.org/event/international-affairs-foreign-policy-and-defence-implications-brexit 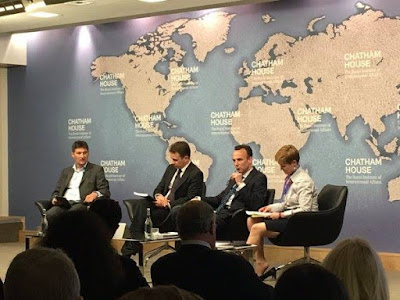 CIDOB presentation on a 'Harsh Brexit'

Some pictures below of the CIDOB and LSE organised event in Barcelona to examine the possible scenarios for a new UK-EU relationship. Further details here: http://www.cidob.org/en/events/regions/europe/scenarios_of_a_new_uk_eu_relationship 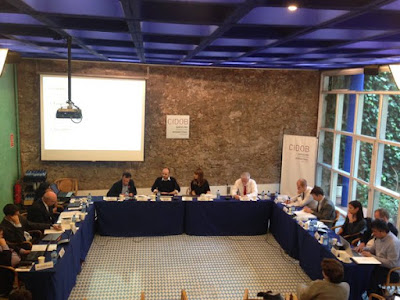 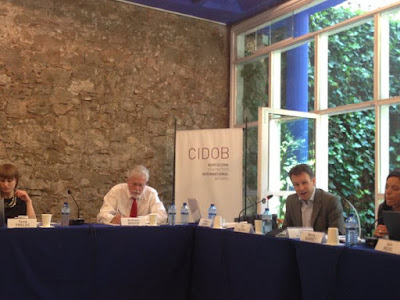 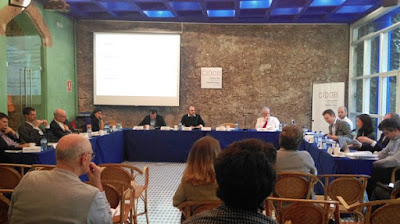 I answered some questions on Brexit for the Spanish national newspaper ABC. You can read the full article here: http://www.abc.es/internacional/abci-inquietud-algunos-tories-sobre-inmigracion-raya-histeria-201605220426_noticia.html and see the printed article below. 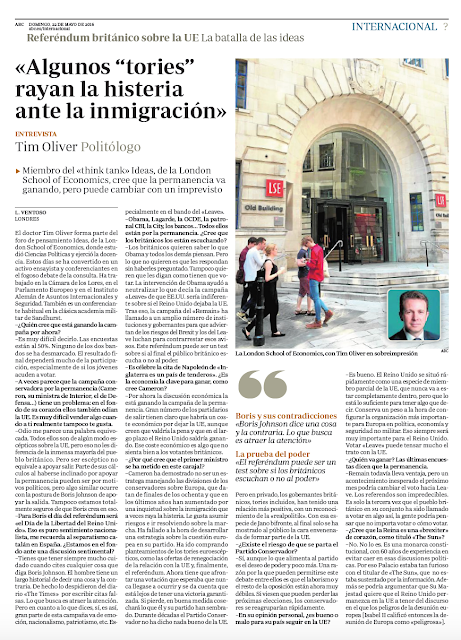 The future of the transatlantic relationship is rarely out of the headlines in Europe or North America. Despite the closeness, the relationship faces – as it has always done – new and familiar challenges.

This report offers views on the future of transatlantic relations from scholars who are at the start of their careers, with European and US perspectives on what the future holds in defence, economics, values, and relations with emerging powers. 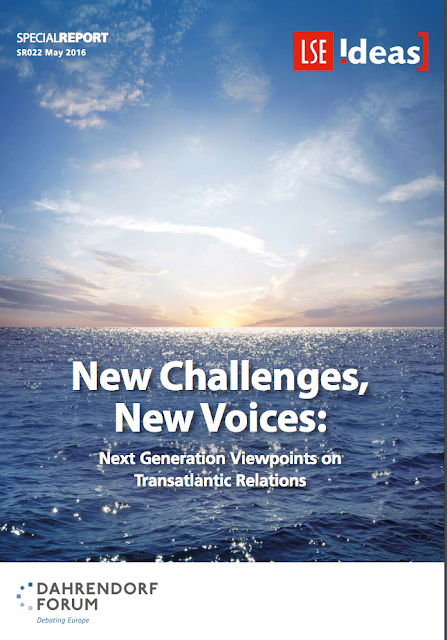 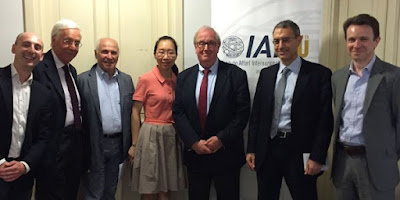 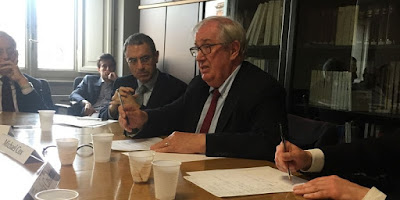 A piece for the Demos Quarterly: http://quarterly.demos.co.uk/article/issue-9/settling-european-question/

Hoping the European issue will go away on 24 June? Forget it, says Tim Oliver: the referendum will be the end of the beginning of the latest chapter in Britain’s fraught relationship with Europe. ... 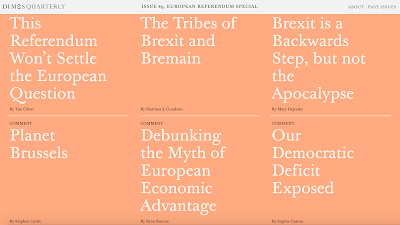 International Affairs book review: 'This is London' by Ben Judah.

‘London; a nation, not a city’, so wrote Benjamin Disraeli in 1870. Now, 146 years later there can be little doubt that London is the UK’s undiscovered country. Anybody following British politics would think that the most important questions facing this European power are about Scotland, rising English nationalism or the future of UK–EU relations. But the biggest question Britain faces is how to manage its capital city, the UK’s most populous, richest and most powerful area, but one rapidly diverging from the rest of the country it dominates. The economic, political, social and security consequences for London and for Britain’s place in Europe and the world are often overlooked. Ben Judah’s work is therefore a welcome guide to a metropolis that many Britons, foreign diplomats and readers of this journal will have only a vague awareness of.

Judah, author of works on Putin’s Russia, turns his foreign correspondent’s eye to his place of birth. ‘I was born in London, but I no longer recognize the city’, he tells us on the first page. While he avoids passing judgement on what London has become, he cannot avoid admitting: ‘I don’t know if I love the new London or if it frightens me’ (p. 3). Today only 45 per cent of Londoners are white British, down from 86 per cent in the 1970s. Yet the city has grown, surging from a low of 6.4 million inhabitants in 1991, and it is now on course to pass 10 million. This is the new London: a global city filled with immigrants, and it is the millions of immigrant Londoners Judah sets out to tell his readers about. To do so he avoids listing the numerous statistics which show London to be a place apart. Instead, he offers pen-portraits of its immigrant communities. To understand these Londoners he goes from visiting the rich homes of Arabs in Knightsbridge (London’s ‘Arab quarter’) to sleeping rough a few streets away with Romanian peasants turned London beggars. Along the way, he tells us of the human cost of migration. He casts a light into the lives of the likes of Poles, Somalis, Afghans, Filipinas and Ghanaians in the large areas of London many visitors never hear of such as Neasden, Beckton and Harlesden. He tells us of immigrants’ views of the English and British, which are rarely complimentary: mean, ugly, lazy, cruel, secretive and snobbish; though there is respect for Britain’s constitutional rights and how people are always saying sorry.

It is this global London that more than any other part of the UK shapes Britain’s place in the world. London’s insatiable appetite for finance means the UK is open to and involved in every global market; the high returns on investment draw in money that overheat one area of the UK economy, and often tie Britain to unsavoury individuals and regimes; the social, transport and housing needs of a global city home to a global ruling, middle and working class skews UK policies and markets; UK–EU relations can be shaped to London’s needs, so much so that in 2013 Prime Minister David Cameron vetoed an EU treaty largely to protect the financial interests of the City of London; a capital city and workforce made up of immigrants (and with an illegal immigrant population larger than the population of Edinburgh) means the UK remains open to immigration and makes it the endpoint for many of the world’s migrant routes (including many of its most dangerous); the environmental, criminal, drug, extremist and terrorist problems facing the metropolis shape UK responses to each; UK views on multiculturalism, integration, race and dealing with the legacies of empire are played out in London; British views of the world and global views of Britain are channelled through a London-centred media and diplomatic community. Readers catch glimpses of all these issues throughout the book. While Judah offers no comparisons with other global cities, readers will recognize patterns seen around the world.

Judah’s style of writing can sometimes jar: I tired of reading about empty fried chicken boxes. Judah also avoids the North American, Antipodean and European immigrants. Immigrants to London, therefore, appear to be divided between the poorest peasants from eastern Europe and Arab princes and Russian oligarchs. He never ventures into the white British or English areas that surround the city or the inner London areas filled with hipster cafes and yoga classes. The English might be leaving large areas of London, cockney might be heading for extinction, but the British still make up a significant proportion and control large swathes of the city. Westminster, Whitehall and the Court of St James may be distant to most of the migrant community, but they remain central to London and shape the way the metropolis relates to Britain and the world. These are, however, minor weaknesses. This is a book to be read by anybody moving to London or who wants to understand the darker sides of global cities.
Posted by at 11:39 am

Speaking at Chatham House, 24 May

I'm speaking at an event on 'International Affairs: Foreign Policy and Defence Implications of Brexit' at Chatham House on 24 May.

Overview:
A collection of articles in the latest issue of International Affairs will examine the implications of a possible Brexit on various aspects of UK foreign and defence policy.
At this launch event, three contributors to the issue will offer their analyses: Richard Whitman will argue that whatever the result of the referendum, it will be a pivotal moment in determining the UK's future diplomatic strategy; Tim Oliver will look at what a Brexit could mean for US–UK and US–EU relations; and Matthew Uttley will focus on the implications of Brexit on defence procurement and defence industries in the UK and other EU member states.

Full Details: https://www.chathamhouse.org/event/international-affairs-foreign-policy-and-defence-implications-brexit
Posted by at 11:26 am

Preparations for a Brexit III: views from Bulgaria, Cyprus, Luxembourg, Poland, and Portugal

Published today by the LSE's BrexitVote blog is the third in the series on how various EU member states might be preparing for a British exit. Views here from Bulgaria, Cyprus, Luxembourg, Poland, and Portugal. 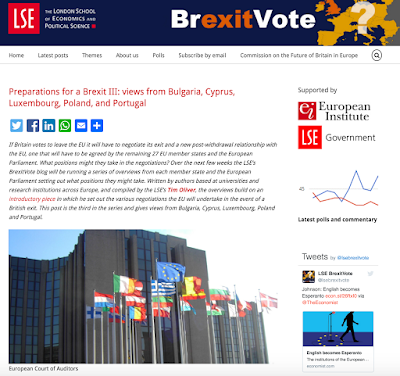 Aritcle in International Affairs: Special relationships in flux: Brexit and the future of the US–EU and US–UK relationships

Article out today in International Affairs on Brexit and transatlantic relations. Written with Mike Williams (NYU). 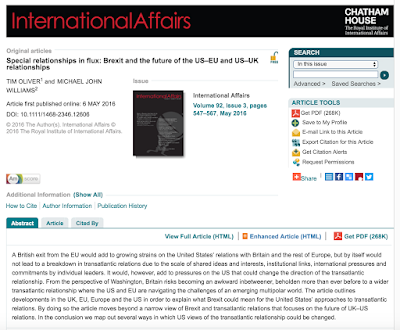 On Tuesday morning I spoke at an LSE IDEAS Executive Masters alumni breakfast on Brexit. Chaired by Mick Cox, other panel members included Gideon Rachman of the FT, Steven Erlanger of the New York Times and Yu Jie from LSE IDEAS.

A podcast of the event can be found here: http://www.lse.ac.uk/IDEAS/ExecutiveEducation/alumni-network.aspx 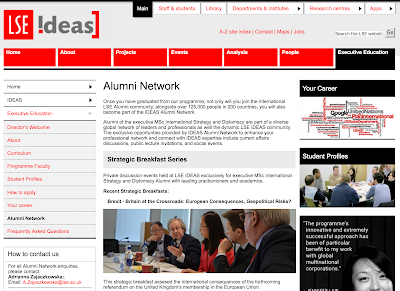 Brexit or Bremain for British Security 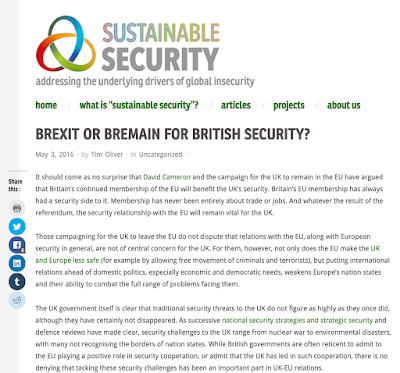