Prime Minister Theresa May’s speech in Florence was intended to move forward stalled Brexit negotiations. But as I argue in this piece for the Dahrendorf Forum, Britain has found itself running into numerous problems with Brexit because its strategy for exiting the EU has been a textbook example of failed strategic thinking.
http://www.dahrendorf-forum.eu/britains-brexit-strategy-lions-misled-by-donkeys/ 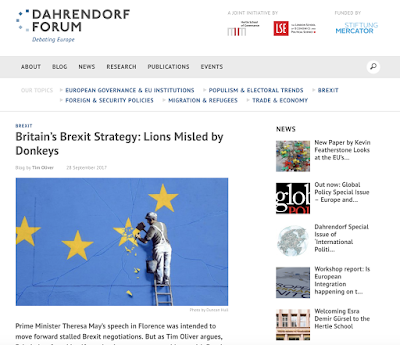 Disappointment all round: experts respond to the Florence speech

The LSE's Brexit Blog ran a piece with analysis from me and several others on the speech Theresa May gave today here in Florence. My analysis is pasted below. 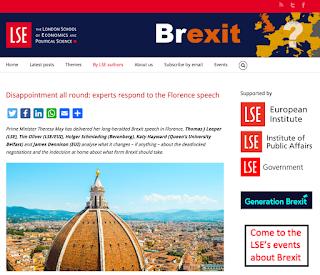 Much has been made of Theresa May’s choice of Florence to deliver a speech intended for the rest of Europe. She was right to point to the historical links, not least in trade, that bind the UK and the rest of Europe together and of which Florence was once the heart. But it didn’t escape the notice of those attending that the venue was a dreary former Carabinieri training college with views of Florence’s main railway station. In a city overflowing with world-renowned first-rate venues she spoke in a nondescript, fourth-rate one that most in the city have rarely if ever noticed. The Italians hardly seemed to have rolled out the red carpet for her. Optics aside, did the rest of the EU hear what she had to say?
For those elsewhere in the EU not transfixed by the German elections, the response will be disappointment and a growing realisation that they need to prepare for a no deal, hard Brexit. Yes, the Prime Minister spoke of the need for a transition period, of paying contributions, of guaranteeing the rights of EU citizens, and dealing with the question of Northern Ireland’s borders. On closer inspection, however, there was nothing substantively new and she continues to try to bridge differences within the Conservative party rather than between the UK and the EU. Both sides will push forward with negotiations, but a plan B will now be on the rest of the EU’s agenda.
This all reflects how the UK’s overall strategy for Brexit has been a failure to set out realistic and clear ends, think of plausible ways to reach those ends, and configure the means to do so. The British government needs to reflect on what the ancient Chinese general Sun Tzu argued in the 5th century BC: ‘The victorious strategist only seeks battle after the victory has been won, whereas he who is destined to defeat first fights and afterwards looks for victory’. In other words: only seek a fight when you’re sure – or as sure as you can be – that you’re able to win. Those destined to lose get into a fight and then try to think of how to win. Having jumped headlong into Article 50 negotiations without a coherent strategy, Britain has struggled to find a way out of the fight it’s in. The prospects do not look good. That’s not something the EU or anyone should welcome.
Posted by at 6:01 pm

Four Facts for Theresa May and the Brexiteers

A piece in the Wall Street Journal on Theresa May's Brexit speech today in Florence.


Brexit is not magically remaking the European Union, and Britain needs a reality-based strategy... 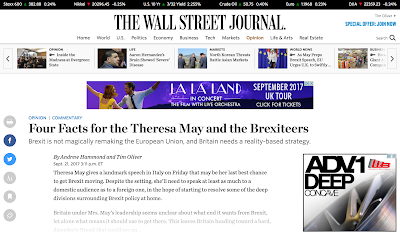 Book review: The EU in Crisis

A review for the LSE's Brexit Vote blog of The European Union in Crisis, the latest contribution to deal with the multi-dimensional nature of the EU’s crisis. it offers a solid starting point to understanding a Union which over the past few years has been tested as it has never been before. 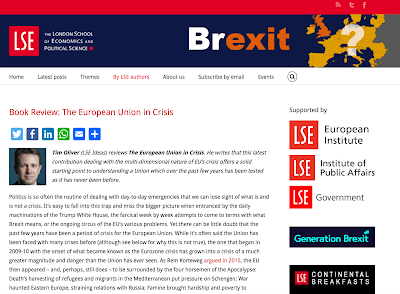 Is Brexit Lost At Sea? 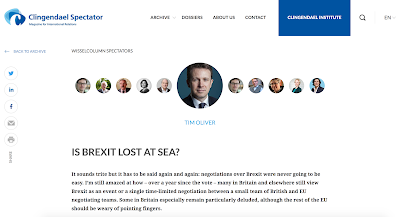