Goodbye Britannia? The International Implications of Britain's Vote To Leave The EU 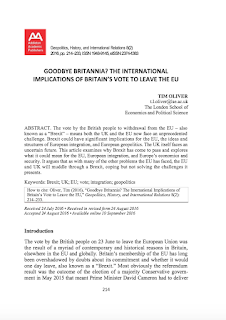 Abstract: The vote by the British people to withdrawal from the EU – also known as a " Brexit " – means both the UK and the EU now face an unprecedented challenge. Brexit could have significant implications for the EU, the ideas and structures of European integration, and European geopolitics. The UK itself faces an uncertain future. This article examines why Brexit has come to pass and explores what it could mean for the EU, European integration, and Europe's economics and security. It argues that as with many of the other problems the EU has faced, the EU and UK will muddle through a Brexit, coping but not solving the challenges it presents. 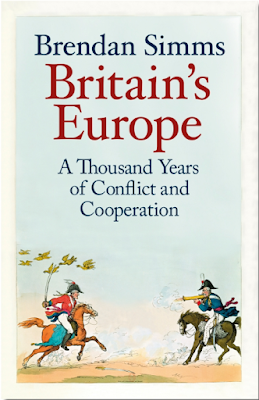 Britain’s referendum on European Union membership was never going to answer what David Cameron called Britain’s ‘European question’. Instead, as Brendan Simms sets out to show, it was the latest episode in a thousand-year history of conflict and cooperation between Britain—and before it England—and the rest of Europe. As Simms makes clear from the start, it matters how that history is told. Taking the approach of ‘our island story’—setting Britain apart from the rest of Europe—fails to adequately grasp how Europe made Britain and Britain made Europe. With Brexit now unfolding, there is a more urgent need than ever for the British to appreciate the flaws of believing they can turn their backs to the continent.

Simms offers readers a chronological history of British–European relations, successfully setting out his case for viewing developments from the Vikings to David Cameron in a joined-up way. He is unapologetically ‘Whiggish’ in his approach, seeing a clear line through that long history. His focus is on foreign policy and constitutional matters, leaving aside economics, society and culture, which makes for a book many readers of international relations will be comfortable with, but which neglects the role of domestic factors in the development and politics of Britain. Nevertheless, throughout the book, the importance of viewing Britain’s history through a European lens is hammered home again and again. Whether it is the military campaigns of King Henry V, the Acts of Union between England and Scotland, the acquisition and dissolution of the British empire, the development of the British state’s institutions, all are explained in part by Britain’s strategic focus on the politics of Europe. This focus, Simms argues, has been as much ideological as security-based: in the last few hundred years the defence of liberty and the defence of the European balance of power were often linked in British thinking.

Appearing throughout the debate is the question of whether there should be a continental or a maritime focus in British foreign policy. ‘They talk as if England were not in Europe,’ was Edmund Burke’s retort to those who believed that being an island was sufficient to secure the country from the chaos of the French Revolution. Europe is, as Churchill said before the First World War, ‘where the weather came from’. Such quotes are found throughout, as Simms critiques the desire to turn away from Europe and think only of the wider world. Such an approach has sometimes paid off, but often only when non-European efforts were designed to serve Britain’s interests on the continent. On the other hand, imperial hubris sometimes led the country to ignore it, leaving its politics to change in ways that did not suit Britain. On occasion, this left Britain unprepared for developments elsewhere in Europe—which it later had to scramble to reshape.

That it has often fallen to Britain to change the shape of continental politics is due, Simms argues, to its exceptional place in Europe. Towards the end, the book changes from a historical study to something of a political manifesto, as Simms sets out his case for the future of British–European relations. A chapter is dedicated to rejecting the declinist thesis of British power, instead making the case that Britain’s exceptionalism makes it the last European Great Power. That doesn’t mean Britain can lead Europe or the EU in the way Germany can, by stumping up the cash to keep the eurozone afloat. Instead, Britain is a security provider and a political model. The EU, Simms argues, needs to follow the example of the UK—and its imitator the US—in making the step to a United States of Europe an event  (as the Acts of Union or the Declaration of Independence were) followed by a process , rather than an interminable process  (i.e. European integration so far) that works towards some distant undefined event  (‘ever closer union’). Europe needs Britain, and more importantly it, and the West as a whole, need this British-style birth of a United States of Europe.


Whether Britain is so exceptional will be the first point of contention many outside the country (and some within it) will take up with the book. The EU might indeed need an event, but the processes by which Britain is governed—and the 23 June referendum itself—have left few observers confident in its ability to lead or set an example. Britain’s indifference over Ukraine means doubts abound as to whether it could provide for the security of countries in eastern Europe. The referendum result might not have been won wholly on an isolationist ticket, but such voices were heard. Victorious Leave campaigners also included those who supported the maritime strategy Simms dismisses as a strategic dead end—unless it works towards some goal in wider European politics. The central warning of Britain’s Europe  is against Britain entering another period where the country forgets that its primary reference point in international relations is Europe and that all others are secondary.

Along with Steven Kiel (GMFUS) I reviewed Barry Posen's book 'Restraint' for International Politics Review. Specifically we discussed what a policy of US restraint (as Posen argues for) would mean for NATO.

Abstract: This review discusses how a decision by the United States to pursue the policy recommended by Barry Posen in his book ‘Restraint’ would play out in the NATO alliance. The review does so by examining what ‘restraint’ would mean for how the alliance faces the problems of European divisions (including a potential Brexit and unravelling or fragmentation of the European Union), continued low levels of European defence spending, European perceptions of US indifference, high-handedness and isolationist attitudes in its presidential race, the spectre of Russian aggression and involvement in the Middle East, and ongoing debates about the alliance’s purpose in the face of challenges ranging from traditional military threats through to the refugee crisis in the Mediterranean. With the LSE's Tony Travers and Sara Hagemann I sat down with the LSE's US Centre to discuss Brexit. Listen to the Ballpark podcast here: http://blogs.lse.ac.uk/usappblog/2016/08/01/the-ballpark-extra-innings-everything-you-wanted-to-know-about-brexit-but-were-too-afraid-to-ask/ 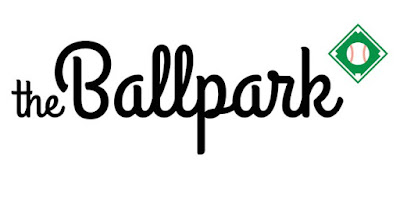